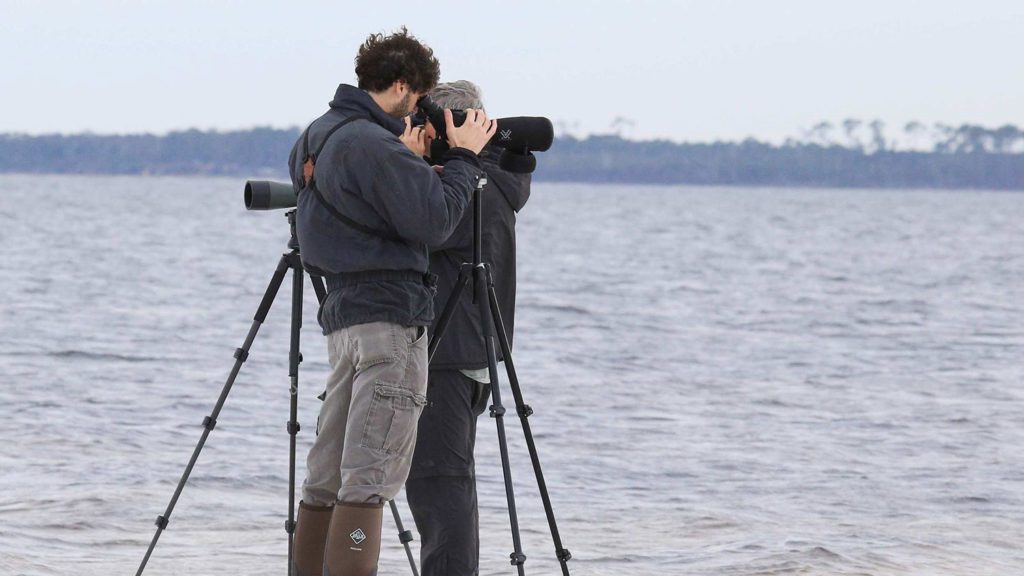 To conduct a wintering waterfowl survey in Pensacola regional estuaries, the East Gulf Coastal Plain Joint Venture’s (EGCPJV) Rob Holbrook and the University of West Florida’s (UWF) Dr. Phil Darby began collaborating in 2013. The overall objective has been to fill in a regional information gap on waterfowl occupancy and abundance as identified by EGCPJV and U.S. Fish & Wildlife Service (USFWS).

A team led by graduate student Phil Coppola completed the initial pilot study to identify possible study sites, methods, and equipment in 2014-2015. They established fifteen observation points around Santa Rosa Sound in 2014. In 2015-2016, they added 15 more survey points around Perdido Key and Big Lagoon, and this time I led the survey.

Specific objectives of this study are to: 1) estimate waterfowl distribution and abundance; 2) identify critical habitat components and disturbances that appear to influence waterfowl; 3) create a partnership between the EGCPJV, USFWS, and UWF; and 4) provide avian field experience for UWF students. UWF graduate and undergraduate students have participated, and several volunteers from the local Audubon Society (Francis M. Weston Chapter) have also helped us. UWF students have also had the opportunity to interact with birding experts from EGCPJV, USFWS, and the Audubon Society.

Critical to this collaborative waterfowl survey has been the support from homeowners and private land management organizations who permitted access to private docks and roads on private islands and sites. We encourage volunteers to share their expertise and assist with this ongoing, collaborative wintering waterfowl survey. We hope this initial baseline data can be used to develop hypotheses that form the foundation of a thesis for a Master of Science degree in biology at UWF. Those interested in volunteering should contact Dr. Phil Darby at [email protected]

Working together to conserve birds through science, habitat conservation, and communication.